Traveling is full of surprises. You can plan out every last detail of your trip to your heart’s content, but just as no battle plan survives contact with the enemy, no trip itinerary goes unchanged. When we started planning this journey, we had all sorts of ideas of places to go, things to do, and potential places to work. We made lists of people we knew in certain places, lists of things to see, and took notes on all the visa and vaccination requirements for the countries we planned to visit. Packing was quite a feat (try packing for snorkeling in the Caribbean and hiking the Inca trail at the same time), but we made our plan as best we could and made it happen. But in spite of all those preparations, we knew that our journey would be mostly improvised, which is the main reason we chose anemoscopio as the name for our blog. We recognized that the winds of change are always shifting and that plans need to adapt to real world conditions. One of the most fun things to adjust to is the presence of friends.

Since Andrea and I have started this journey wandering through Latin America, we’ve gotten used to making new friends on the road. From a homestay in Cuba to meeting a rock-balancing nomad in Mexico, we’ve learned to open our hearts and share our experiences with those around us. Sometimes we have friends for a few days, sometimes only for a few hours. That being said, with the one notable exception of Andrea, it’s very rare to spend time with or even talk to someone I know and that knows me well, but in Nicaragua, we were lucky enough to spend time with some old friends.

Before we even arrived in Nicaragua, we knew good times were on the way. Our good college friend Lindsey had booked her ticket months before to be our third travelling musketeer for about 10 days. We also had a friend named Olga that lived in Managua and had reached out before heading to Cuba to give her a heads up. When we landed in Managua after a 10+ hour journey from Havana, we were pretty excited to meet up. That night, the four of us all got together and spent an hour leisurely catching up on life, sharing experiences, and planning things to do in Nicaragua while enjoying glasses of red wine and lounging in the grass at our hostel. While we’ve grown comfortable in our own skins on the road and know how to make any place home for the night, Olga and Lindsey’s presence really did add something special.

I’d actually visited Nicaragua in 2011 for a week or so and had a great time visiting San Juan del Sur and Ometepe, but my experience seeing the country with Olga was totally different. Her local perspective helped us move past the typical tourist trail and get to know the “real” Nicaragua a little bit.  She shared all kinds of details about the history of the country, the economy, how goods are imported, how recently American businesses have come in, and some of the finer points of Nicaraguan Spanish that I simply wouldn’t know otherwise. (If you’re trying to say something is cool, rest assured that “Que tuani!” will get the job done in Nicaragua.)

We also got some super tactical advice from Olga. Normally we have to do some shopping around to find the cheapest grocery store for cooking supplies, but with Olga’s advice, we got to skip straight to the good part and bought our groceries at the local Pali. She also gave us the quick route to cheap buses by telling us about the various bus companies and how prices compare. Nica Bus and Tica Bus, while super nice, are much more expensive than the local “colectivos,” which leave from Huembes station in Managua. (We got from Managua to the Costa Rica border for $120 cordobas, or $4  USD each). We had originally been interested in one of the bigger public markets in Managua, but she unequivocally told us to stay away as it can be pretty dangerous. Having a local friend is super helpful.

Although she was born and raised in Managua, Olga told us to get out of the city and see the rest of the country as soon as possible. Managua is the capital city and houses a large portion of the country’s population, but there isn’t so much to do and things can be pretty expensive. She said that on the weekends, even she and her friends like to get out of the city to enjoy the beach, the lake, or some mountains, all of which are only about an hour away. Since we only had 10 days to fit in a few different experiences, we were thinking about heading south to the beach and then heading to the island of Ometepe in Lake Nicaragua. Olga encouraged us to make a quick day trip to Masaya Volcano, Laguna Apoyo and Granada before heading south. We only spent half a day in Granada and we wish we’d stayed longer. It’s a delightful small city that’s preserved its original colonial architecture and city layout. Right on the shores of Lake Nicaragua, it’s full of things to do. We spent quite a bit of time wandering through the local market, buying snacks and fresh fruit to try as we explored. Thank you Olga for the great advice and a wonderful day trip! (Photos below.)

Traveling with Lindsey also gave me a different perspective. With her around, I was looking at Latin America with fresh eyes. The endless Central American sun was new again and I found myself noticing each street food stall and vendor’s call that would normally all blend into the background. Whereas I’d taken the opportunities to practice Spanish for granted over the past few months, I was reminded of the rarity of such an opportunity when you’re living in the US.

Andrea and I have grown used to long-term travel and have slowed down a bit from the breakneck pace of changing locations every day that we had in Mexico. Lindsey only had 10 days to see the country and had been living in Boston, so she wanted to soak up as much sun and tropical vibes as possible. She has awesome energy and such an exploratory spirit. During her 10 days there, we saw Managua, Masaya Volcano, Lake Apyo, Granada, Playa Colorado, San Juan del Sur, Playa Madera, two places in Ometepe, and countless bus rides in between.

By traveling with Lindsey and absorbing some of her enthusiasm, we realized that our long-term travel mindset is very different from that of someone on vacation. The way we utilize our resources is different. Andrea and I have tons of time, few future commitments, but little money, so we tend to throw time at problems like transport in order to save a few bucks. We avoid taxis as much as possible as a $5 taxi ride makes up a big portion of our daily budget, but for someone with a limited timeline, a $5 taxi ride from one city to another makes perfect sense. Lindsey’s timeline gave us the idea for destination-oriented travel guides. We know that most people don’t travel the way we are and only have so many vacation days to spend before they have to be back in the office. We lived that life for years. We’re working on travel guides for the countries we’ve visited so far and can’t wait to share them soon!

Olga took a Friday off and we all headed down to Playa Colorado on the south Pacific coast to enjoy a long weekend at the beach. Andrea booked a few nights at an awesome eco-hotel called Tuani Lodge only a few minutes from the beach. The four of us spent the next couple of days enjoying the sun, waves, and good company. We took advantage of the well-stocked kitchen to make some fun, well-spiced travel dishes after spending all our energy under the sun and spent the evenings playing cards, chatting, and sipping on glasses of wine while we listened to the jungle fall asleep.

In a strange twist of fate, we even got to meet up with a high school classmate of Andrea’s that’s been living in Nicaragua for a couple of years now. To top it all off, it turns out that she’s from my hometown and we have friends in common! It can be a bit strange how much information you get about your extended social circle through Facebook these days, but I’m thankful in this case as it connected us with Katie. She has a fun, adventurous spirit and we had a blast body surfing, doing cartwheels, and taking creative sunset pictures on the beach with her. 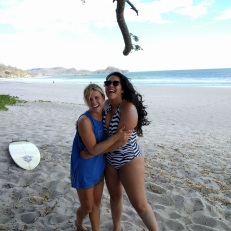 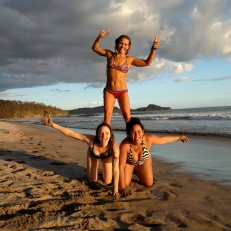 Fun in the sun. 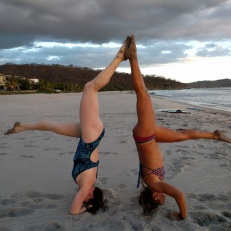 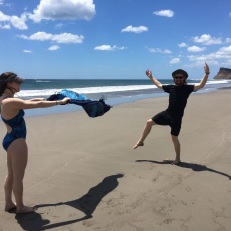 As I sat on the beach watching the sunset that Saturday, I was overwhelmed with a sense of gratitude and awe. A year ago, I never would have dreamed that I’d spend a weekend with my girlfriend, two college friends, and one of Andrea’s high school friends at a beach in southern Nicaragua. It seemed so far away from my life in Seattle that it was unthinkable. I also couldn’t help but think about the chances of such an encounter. It says a lot about the hyper-mobility and interconnectedness of our modern world, and my circle of friends, that such a random group could come together in such a seemingly random place. We often say that every person has their own life path. My path has taken me from North Carolina, to China, to Vermont, back to China, Brazil, all over the American Midwest and South, and the Pacific Northwest. It’s a pretty random assortment of places, but I’ve met people in each location and enjoyed sharing experiences and life phases. Every time I move, I feel like I have to say goodbye to the place and all the people that were part of my life there. It’s a sad process, but also full of excitement for what’s to come. I’m realizing more and more that we never really say goodbye, but rather “See you later.” Paths re-cross. Friends come to visit and if you’re open to it, you can find yourself in a familiar setting thousands of miles away from anywhere you’ve ever been before. Enjoying a beach weekend with friends in Nicaragua is just one of the myriad of ways our paths are continually crossing and I’m very thankful for it. 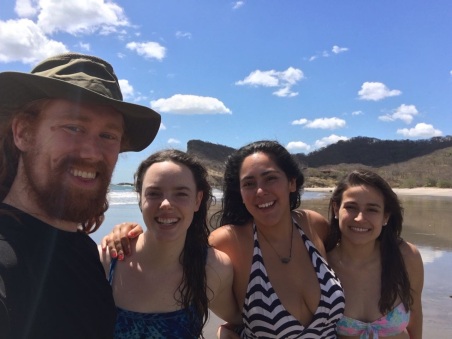 4 responses to “Nicaragua with Old Friends”