Colombia has a bit of a rough reputation for historical reasons, but it’s a fantastic place to visit. Since leaving Mexico back in February, we felt most at home in Colombia. I don’t know if it was the people, the food, or the sheer diversity of climates we experienced, but we constantly found ourselves enchanted by what we saw, wandering down streets unplanned to listen to some live music, watch people dancing, or just enjoy the spectacular graffiti. For a country with a history of such violence due to narcotraffic, we found it open and welcoming. Life is on the street and we loved being a small part of it. We started by spending several days in tropical, coastal Cartagena, and then wound our way south through the mountains to Medellin, Bogota and Cali before crossing into the Andes in Ecuador.  We hit the big cities, but we know there’s a TON we didn’t have time to explore and we’ll be back before long.

As far as Latin American destinations go, Colombia is an easy one to travel in. It’s an easy flight away from the US, major Latin American cities, and Europe. We flew to Cartagena from Panama and then took night buses through the rest of the country. The transportation network is well-developed and we were glad to see that Uber was present in all of the big cities. In terms of language, Colombian Spanish is clearer than many other countries and most people in the tourism industry speak English fairly well. 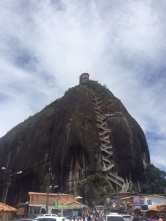 On average, we spent about $24.94/person/day. We stayed in hostels, took night buses to save on hostels, and cooked some of our own meals, mostly breakfast and sandwiches for lunch.

Colombia can be done easily by bus or plane, depending on your timeline and budget. We flew to Colombia from Panama using miles, but then traveled exclusively by bus with no problems whatsoever. We highly recommend you use the Rome2Rio app to figure out your route and also ask around to double check ALL THE TIME.

Our average long distance bus cost was $24.09 USD/person and the buses were good. We took night buses from Cartagena –> Medellin –> Bogota –> Cali.

Our average Uber/taxi within cities was $3.83 USD.

Colombia was a foodie’s paradise, even for us on a budget. We enjoyed great seafood in Cartagena, hearty Paisa fare in Medellin, and a touch of Andean cuisine in Bogota. There’s a lot of variety and we tried as much as we could. We ate out 18 times (including snacks and street food) and paid an average of $4.62/meal for the two of us, not including snacks. Speaking of street food, I highly recommend you try arepas and empanadas! Our average daily food cost (restaurants, snacks, and groceries) was $4.72/person.

There’s a lot of variety on the higher end of the price spectrum, and if you’re looking for anything particular, I’m sure you can find it with a little work.

We stayed in 5 hostels and 1 hotel, the rest of our nights being spend on buses. We paid an average of $9.90/night/person and had good experiences.

All the hostels we stayed in had clean dorm beds with WiFi, decent common areas, and a kitchen. AirBnb is definitely an option in the cities if you’re looking for more privacy, but we did just fine using HostelWorld.

The CDC recommends you get vaccinations for:

When we flew in from Panama, no one checked our vaccination records.

We fell in love in Colombia during our short visit and are confident you will too. From the massive Arvi Park (a big nature reserve) accessible by metro in Medellin, to the impressive presidential palace in Bogota, to this hidden church by the Ecuador border, we were never bored and were constantly meeting friendly people. That being said, we only scratched the surface. Colombia has a LOT to offer, no matter if you’re looking for hiking, shopping, beach, or mountains.

It’s easy to get into Colombia through one of the major airports and bus transport through the country is very doable as well. We loved seeing the bigger cities and can’t wait to visit again to get off the beaten path. If you want to read more about our experiences there, see this article on our journey from Cartagena to Ecuador.

One response to “Colombia: Quick and Dirty Country Guide”